Stick Length: 60" from heel to end of shaft 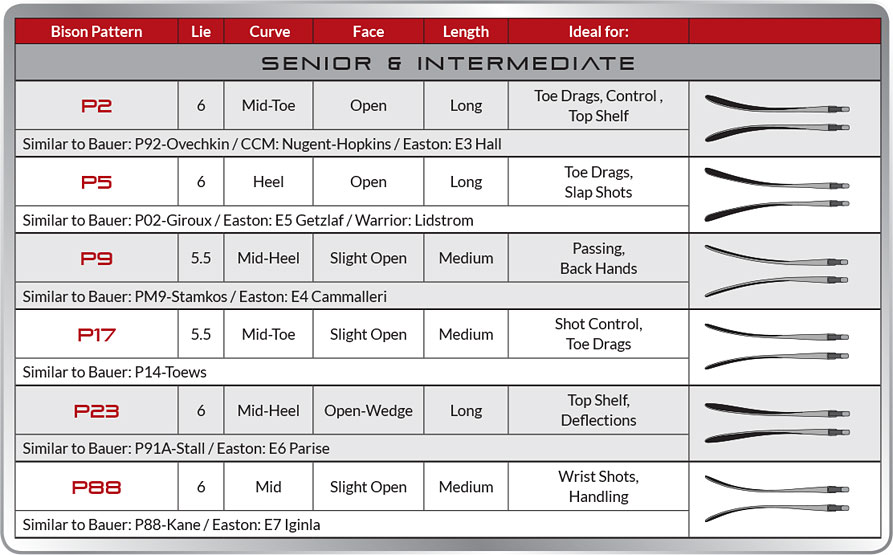 Afraid to give it 5 stars! LOL

I am almost afraid to give it 5 stars because I don't want them jacking up the prices. I moved to Bison after testing a stick out in my local rinks pro shop. I moved was replacing and old Easton Stealth and I have never regretted it. I broke one of the original sticks I purchased ( I slashed someone - no call). Just picked up 2 more. Also Rob was a great help. I asked about stepping up to the SLT and after I gave him a run down of how I played gave me an honest opinion that kept me in the Blackout 435. This is what wins customers. How could have got me to buy the slightly more expensive stick.

Great stick and replacement for my Easton Stealth.

I really like these sticks. The flex is dead on and this is my 2nd one of them. My original is still in use and I just got this for a backup. I would have waiting but I am worried the company won't be getting new sticks. I have asked twice on their Facebook page and never gotten a response to when they are getting new ones in. Honestly I wanted the 435 SLT but they have never have the flex or curve I have wanted and this is since last November. Great sticks and they ship fast but I'm not confident they will be around for much longer so get them while you can. Would have given 5 stars if I ever heard back about the ability to get the model I actually wanted

Hands down honestly the best stick i have ever used. I was honestly alittle worried to try Bison Hockey Sticks out because you can get a name brand stick for around the same cost plus i never heard or scene Bison Hockey Sticks in person. I went with my gut feeling and ordered one anyways. Boy am i glad i did. My shot is alot more responsive, the stick is SUPER lite weight, and its really well engineered. Since i bought my first one, i have really talked them up to the point that i now have 6+ players on my Ball Hockey tournament team all using Bison Hockey Sticks. I have other teams asking me what im using too as they see it. Rob in customer service has been fantastic! Always very polite, super fast shipping. I honestly couldnt ask for much more. 5stars Bison. Great work!!

Loving these sticks so much

ended up a few weeks back getting my second one of these beauties and am loving it just as much as the first one which is still in perfect shape. the weight is so light and the torque on my shots with the 105 flex is unreal. have a few goalies hiding from me now lol

I had seen these sticks at an event in NC that one of my teammates had. I looked into it more and decided to use one of his which I ended up buying off him. The stick is so light yet incredibly strong. My shot is even quicker now and shockingly has lowered my shot as I would religiously shoot the puck high and over the net etc. has great feel to it almost like wrapping your hands around a bauer APX. A solid stick and im happy to say i ordered a new one last week and cant wait to get it…originally posted on Bisonhockeysticks.com 7/7/14 John Deprima

Bought a pair for my 18U so, he played with them all last season across 3 teams and they are still in great shape. My son likes the stick better than his last one (a Bauer)… and I have plenty of $$ left over for new pads, gloves, travel and beer!!..originally posted on Bisonhockeysticks.com 5/26/14 waynek

Can’t beat it at this price point

Like the title says, I don’t think you can beat this stick for the price. It’s light and has good feel. Stick handling is much better compared to other sticks in this price range for me at least. Shot accuracy is better for me as well…originally posted on Bisonhockeysticks.com 5/26/14. Frisky1112

I used a bison that a friend gave me and I loved it so much I bought two more…originally posted on Bisonhockeysticks.com 5/24/14. Melchy266

Pound for pound the best stick on the market for price!...originally posted on Bisonhockeysticks.com 5/24/14. Crawdaddy

Keep on keeping on. Second stick in only two years of playing hockey 5-6 times per week…originally posted on Bisonhockeysticks.com 5/24/14. ABC

$3.49
COLORED CLOTH HOCKEY TAPE 1 INCH X 30 YARDS MADE IN THE USA LONG LASTING EASY TO APPLY UNWIND TO THE CORE